Sometimes the wrong train will get you to the right place.

We’re finally back in Finland, after nearly two years on the road. It’s nice to be back, but it also takes a bit to settle back into normal routines, and get used to the fact that we don’t constantly need to figure out where to sleep, or what visa requirements exist for our next destination, or anything like that.

Now that everything is done, we thought it wise to write one final post to summarize the whole experience. Somewhat similar to Our Year of Traveling post, but covering all the bases this time. 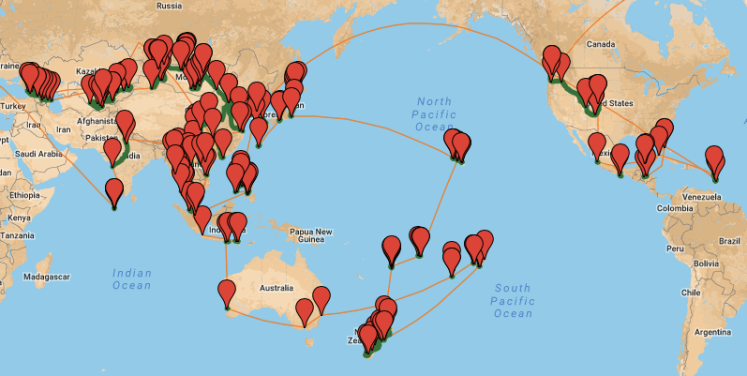 But first, some statistics.

This averages out to a little over 18 days per country, but of course we spent much longer in some places and much shorter in others.

This happens to be just over the circumference of the earth. So if all the legs of our over land travel were stretched out and wrapped around the world, they would overlap by some 200km.

This is 65 independent flight legs (layovers included). Our total flight distance is almost 30% of the distance from the Earth to the Moon.

Places We Spent the Night: 187

What was your favorite place and why? Has it changed since the year mark?

Oona: I don’t think it changed. Buy me a ticket, I’ll go back to French Polynesia any day.

Ian: Mine didn’t change either. There was something alluring about Tajikistan, and Central Asia in general, that I would love to go back to.

What are your top three cuisines from the places you visited?

Ian: Indian, Sichuan, and Mexican, again in no particular order. Vietnamese is way up there too, but it’s hard to gauge it since we didn’t visit the south this time.

What was your favorite travel day?

Oona: The motorbike trip between Jargal and Ikh-Uul in Mongolia. It was a lot of fun, even though I was afraid we’d fall when we were crossing the rivers with our backpacks on. Our drivers were racing each other through the wide open desert and it was just such an adventure.

Ian: It’s hard to pick exactly one, but the train trips in northern Japan were amazing. The trains in Japan are so organized and they go virtually everywhere. One particularly memorable trip was coming back from Hirosaki to Aomori just as it was beginning to get dark. The snow was falling and we were standing right behind the driver’s seat, watching the train plow through the fresh powder.

What was your favorite local beer?

Oona: I liked the Kiva from Matutu Brewery on Rarotonga in the Cook Islands.

Ian: I’d have to go with the bia hơi in Hanoi, or really all over Vietnam. Not only was the beer delicious, but the places where it is drank are a ton of fun too.

What was the most miserable night of the trip?

Oona and Ian: Definitely the train trip from Kunming to Emeishan. This was probably the worst night ever, in fact, not even just of the trip. Hardly a wink of sleep was gotten as we were packed into the train car with about a million other Chinese folks. They were yelling, drinking, smoking, spitting, snoring, throwing their garbage on the floor, all night. Just all manner of really terrible things happening the whole night. And to top it off we couldn’t even sit next to each other, and so the person sitting next to either of us would lay their head on our shoulder instead.

Oona and Ian: The motus around the Aitutaki lagoon in the Cook Islands. These are the real deal; the next levelest of beaches. The water is warm and the clearest we’ve ever seen, and the white sand beaches envelop the lush green palm trees on the tiny islands. They are uninhabited, so nobody in sight; nothing but the sound of crashing waves and wind. We’re telling you, it just doesn’t get better than this when it comes to beaches.

Oona and Ian: Definitely that one in Taha’a, French Polynesia. The temperature was perfect, the mosquitoes were few, and the sky started turning these totally brilliant, otherworldly colors, and the silhouette of Bora Bora was clear on the horizon.

Oona: Definitely 400 Gradi in Melbourne. The restaurant is quite nice, and we picked a great bottle of wine to accompany our pizzas. It was our date night, and was needed after so much backpacking.

Ian: I’m going with Altrove in Coron. Part of it, I think, was the fact that we were in this random place in the Philippines, perhaps one of the last places you’d expect to find good pizza. The owner is from Italy, and he has another place in El Nido, but the pizza is really good and surprisingly affordable, and you’re still in the Philippines.

Finally, we want to thank you all for being part of our readership, it has been a ton of fun contributing to this blog over the years. But, now that our big trip is done, we certainly aren’t planning on quitting traveling or anything. We’re settled down for the time being, but we always have ideas for our next destination. We’ll continue posting to this blog after this, but the updates will probably be a lot less frequent now.

4 thoughts on “The Big Trip”